Pratt & Whitney Rzeszów has traditions reaching back to 1937, when Wytwórnia Silników Nr 2 (Engine Manufacturing Plant Two) was constructed as part of the Central Industrial District. The construction site was visited by representatives of the government, such as Eugeniusz Kwiatkowski, the deputy prime minister and author of the concept of the Central Industrial District. 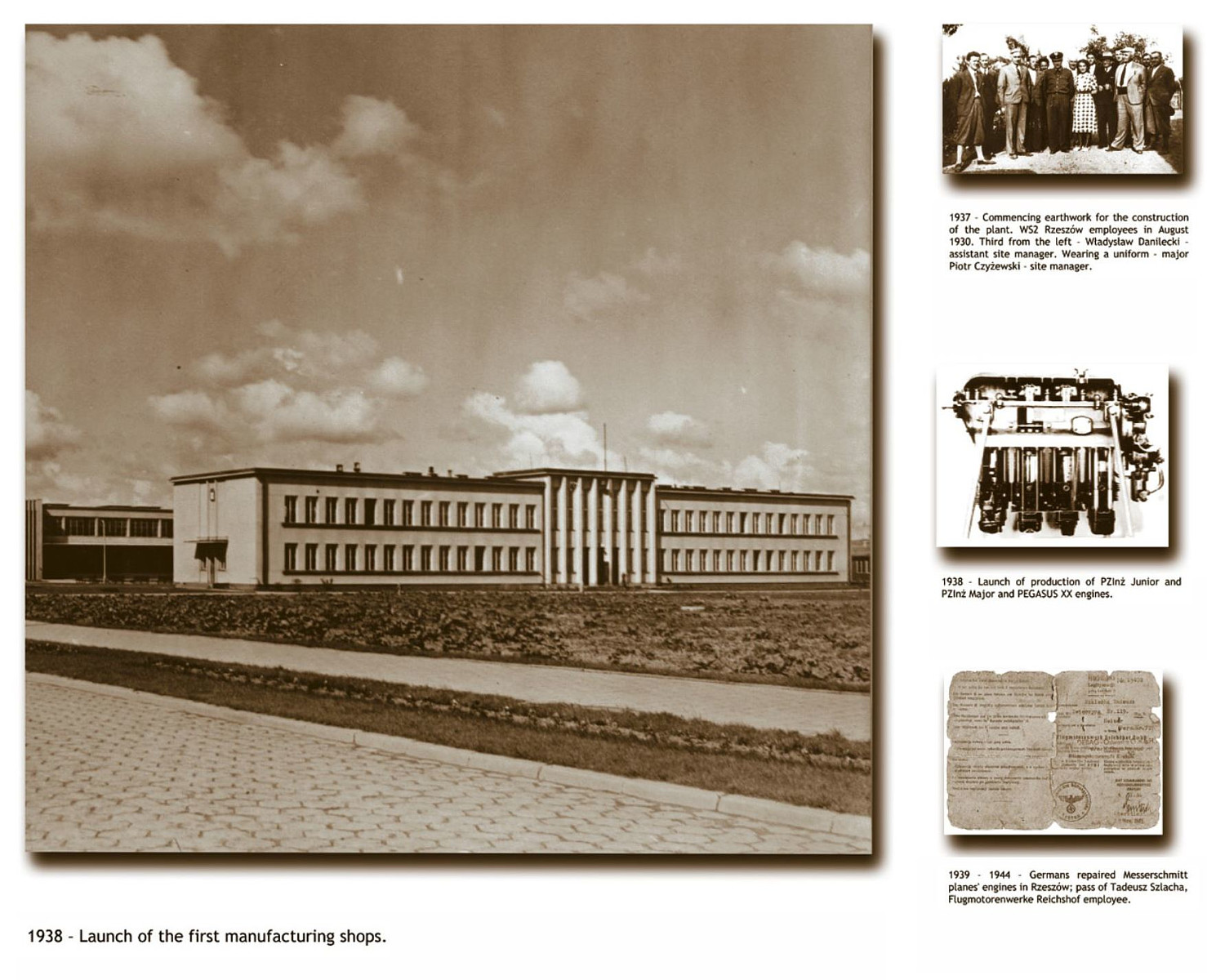 On 9 September 1939, Engine Manufacturing Plant Two was taken over by the Germans and organisationally divided between Flugmotorenwerke Reichshof GmbH (incorporated by the Ernest Henschel aircraft corporation of Kassel, Germany) and Daimler-Benz of Stuttgart, Germany (the latter established aircraft engine repair shops for the Luftwaffe operating on the Eastern front). At the end of 1941 they employed 2,000 workers, performing overhauls and manufacturing parts for combat aircraft engines, such as the DB-606A. On 2 August 1944, the plant was taken over by the Soviet military directorate. In July of 1945, the Engine Manufacturing Plant Two facilities were released to the Polish authorities, and continued operation under the name Państwowe Zakłady Lotnicze Wytwórnia Silników Nr 2 (State Aviation Works Engine Manufacturing Plant Two) for the next four years. Operations performed in that period, apart from work on a wide assortment of products unrelated to the aviation industry, involved – metal working machines, cutting tools, parts for tractors and cars – overhauls of Russian aircraft engines and their parts. In 1948, the overhaul of twenty-four “JUMO” 211 ABD/GH aircraft piston engines was conducted for Sweden. M-11 D was also launched, licensed by Russia, and then its M-11 FR variation for Jak 18, CSS-13 aircraft, as well as Junak-2, Junak-3, and Żak-Zuch designed by Tadeusz Sołtyk.

The years 1950-1952 were an important stage, as this saw the beginning of the production of turbine engines, licensed by the Soviet Union. New facilities were developed, including the forge department in 1951 and the aluminium casting house in 1952. Other facilities appeared in the following years – departments for mechanical working, assembly, sheet-metal shop, etc. The first original construction was designed and developed under the supervision of Tadeusz Mirski, Eng. (1956-1958), a prototype for a jet-turbine engine – TO-1. In 1955, based on the technical documentation, speedway motorcycles and engines were manufactured, i.e. the popular FIS’s. In 1957, the SM-1 helicopter gearbox production programme was launched. The gearboxes, along with the 7-cylinder Lit-3 piston engines which entered production in Rzeszów in 1958, were the power plants for the SM-1 helicopters. The “by-production” included engines for the “Mikrus” passenger car, box column drilling machines, pulsejet engines for spraying insecticides, cream separators, knitting machines, machine tools and tableware. In 1960-1961, a prototype workshop was created for aircraft engines. This is where the HO 10 jet engine was manufactured, based on the obtained standard, and which constituted the first power plant for the TS-11 “Iskra” (Spark) trainer aircraft. Production of the ASz-62R piston engines started in 1961. After 1964, with the initiation of the power plant for the Mi-2 helicopters, the expansion of the plant continued.

Affiliate branches were created in 1966-1970. In 1966, the production of the GTD-350 helicopter turbojet engine began, with the launch of the WR-2 helicopter gearbox for Mi-2 helicopters. The SO-1 turbojet engine was also manufactured, followed by its enhanced version, the SO-3, as installed in the TS-11 “Iskra” trainer aircraft. 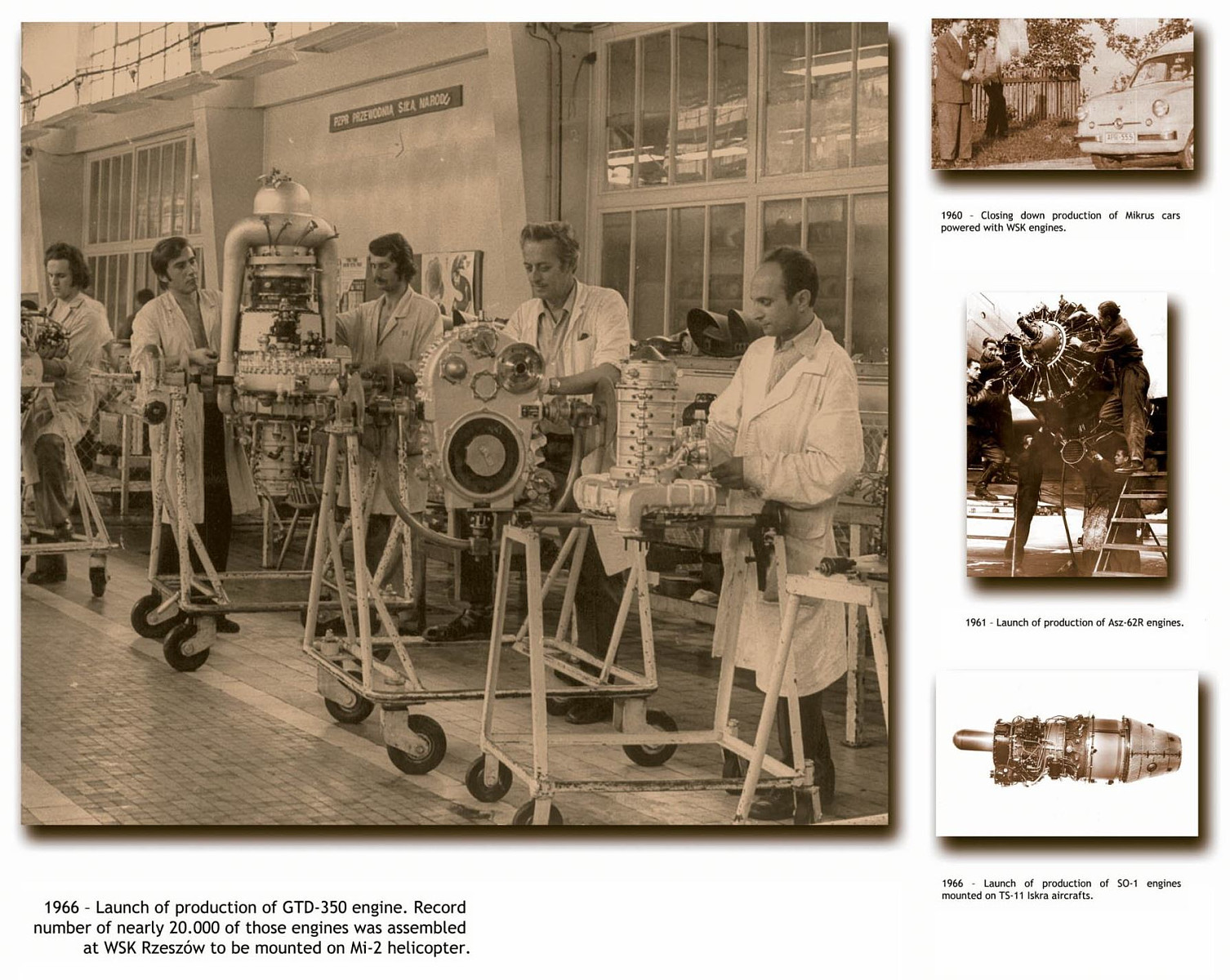 The 1970s marked another stage of intense development, as this is when further affiliate branches were created – in Żołyń, Dynów and Bartkówka. In 1973, a new iron foundry was commissioned. In 1975, the company changed its name once again to the one it is still known under, i.e. WSK “PZL – Rzeszów”. This is also when the production of the PZL-3S engine began for the power plant in PZL-106 “Kruk” agricultural aircrafts. In 1977, production of PZL-Franklin engines was launched, as well as “Vulcan” flexible couplings and, in 1978, drill chucks and Renk-type gearboxes. In 1976, by the agency of PHZ PEZETEL, a long-term contract was concluded with Pratt & Whitney for the production of the majority of parts and assemblies for the PT-610A engines. In 1996, a direct cooperation agreement was signed for the following 10 years. 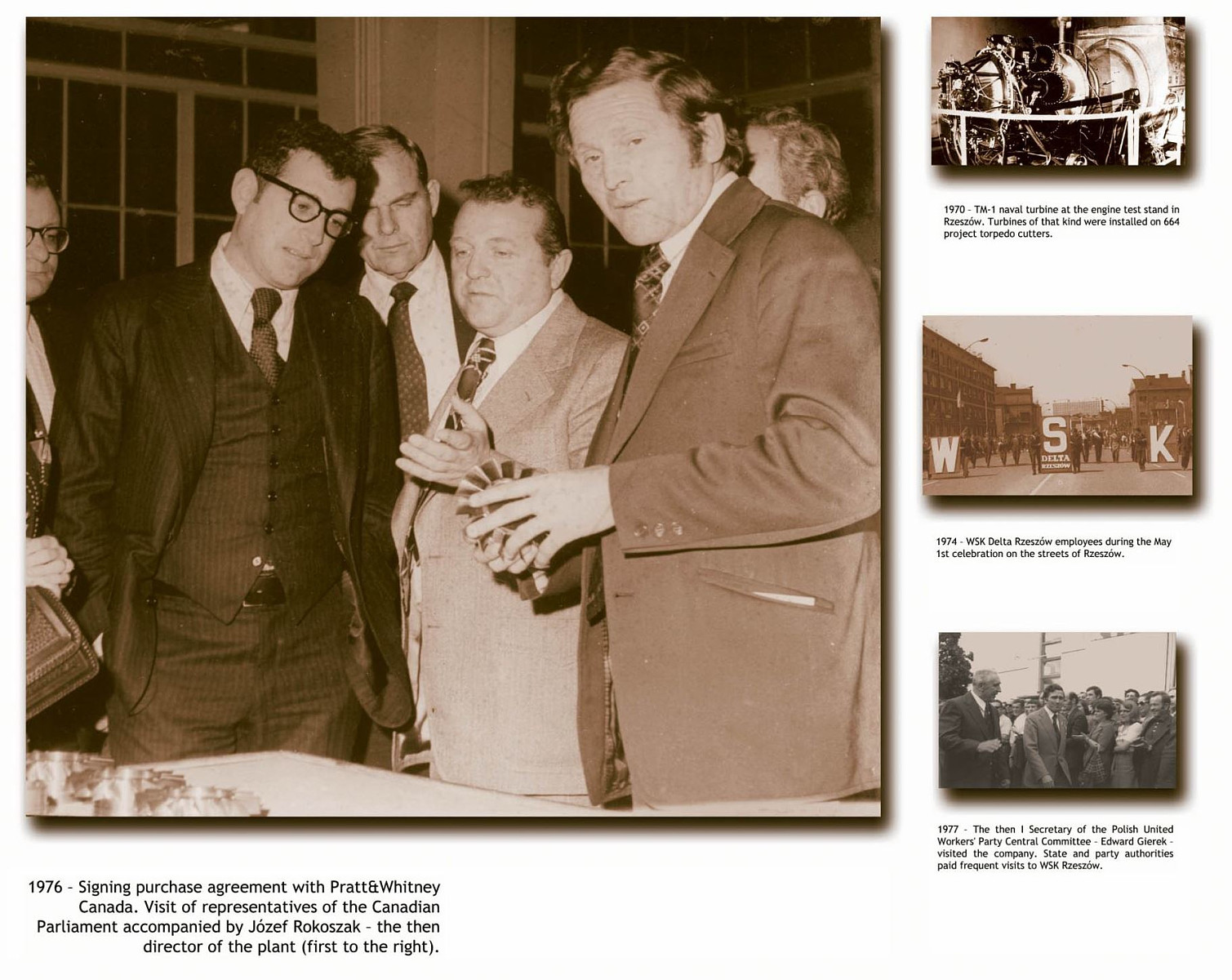 Since 1980, the manufacturing business at WSK PZL-Rzeszów has seen more upgrades and new products. The SO-3 engine was replaced in 1981 by the SO-3W. Based on the documentation, 1984 saw the launch of production of the PZL-3SR piston engine for the PZL-106AR “Kruk” and the PZL-106BR “Kruk” agricultural aircrafts.

Production of the TWD-10B turbo-propeller engines for the AN-28 aircraft was initiated. In 1986, production of the PZL-10W engine started, which, together with W-3 gearboxes, constitutes the power plant for PZL “Sokół” helicopters. 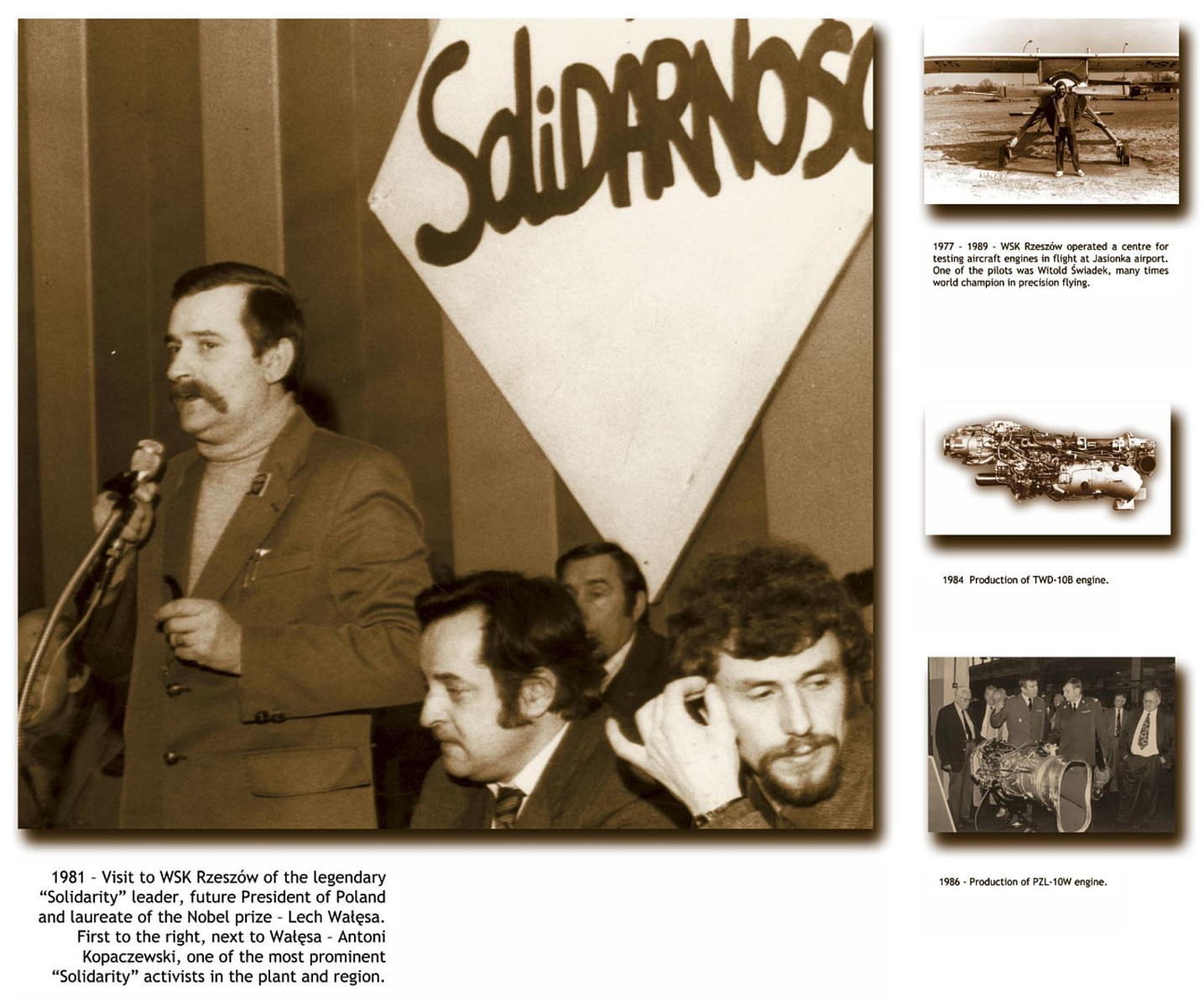 The crisis in the national automotive industry in the 1990s and the collapse of the Eastern market, where 75% of the production had been sent, brought the possibility of disaster for over 10,000 employees. The years 1992-1993 saw restructuring processes taking place within the plant. In 1993, new partners were found, including: General Electric, Allied Signal, Hispano-Suiza, and Snecma. The care for quality resulted in the ISO 9001 quality assurance certificate (1995) and other certificates, such as JAR-145 (1996). The latter was obtained by WSK as the first aviation company to do so in Poland. In 1994, WSK Rzeszów was transformed into a Joint Stock Company owned by the State Treasury. On 21 September 2001, an agreement was signed on the sale of 85% of the shares in WSK to United Technologies Holding S.A. On 11 March 2002, the block of shares was transferred to the new owner at the Ministry of Treasury. The privatisation was followed by large-scale capex projects for the company, which resulted in huge qualitative and quantitative improvements for the whole business. The changes have been especially profound in the applied technologies and processes, new products, management, EHS, and employees’ awareness and mentality. New technologies and new products were all implemented. 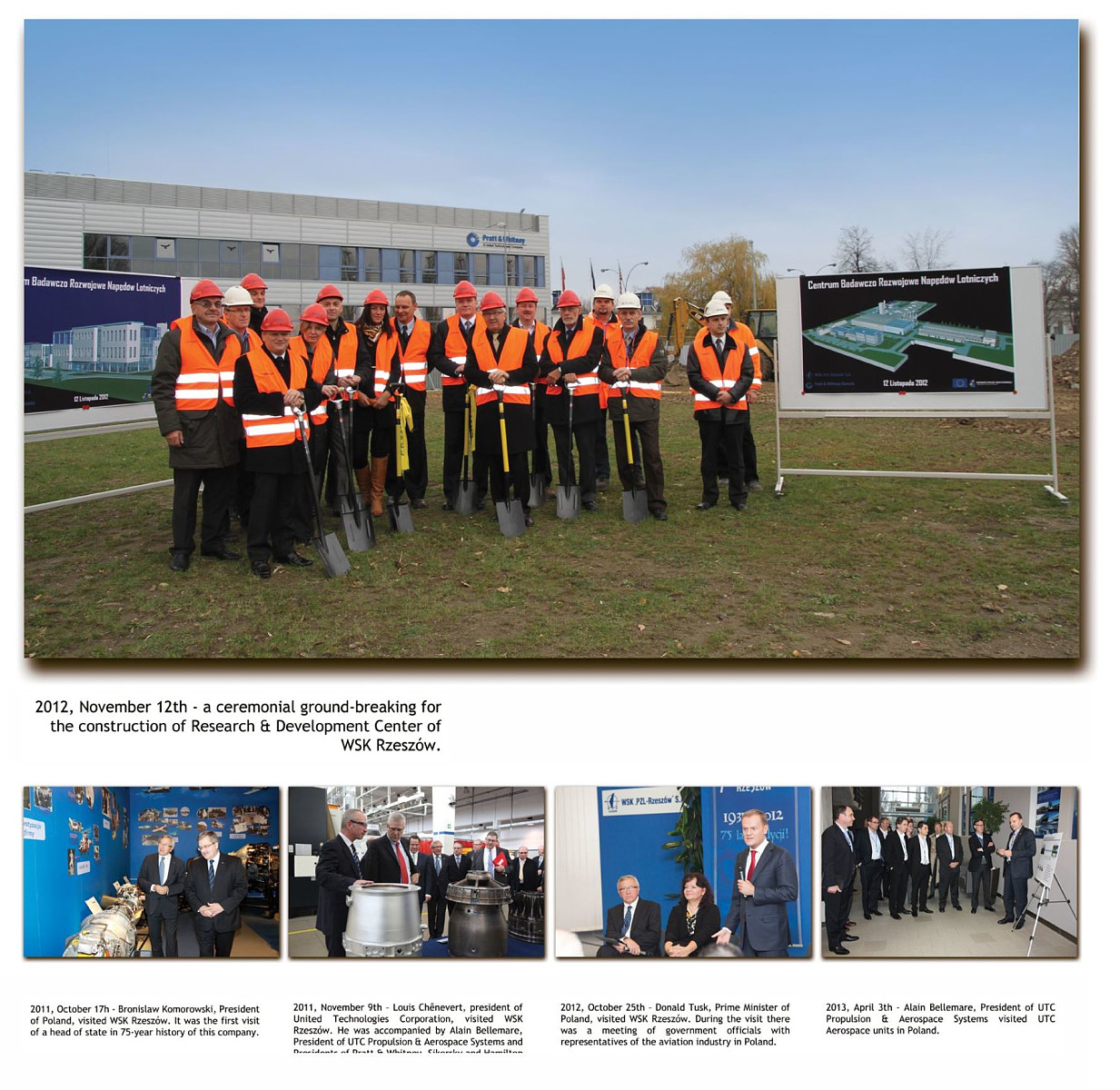 The design office was modernised, and modern test stands were developed. The engineers participated in design works related to the modern engines developed at Pratt & Whitney. Pratt & Whitney Rzeszów is recognized as the best employer in the region. We build a modern, safe and employee-friendly company. We employ nearly 3700 employees. We care about our employees by creating safe workplaces, providing a wide social package and comprehensive medical care, further education and cultural development of each employee.

Our more than 80 years of experience have taught us that investing in human capital is just as important as working on new technologies.

View our FB
The edito website uses cookies. if you do not change your browser settings, you agree to their use.